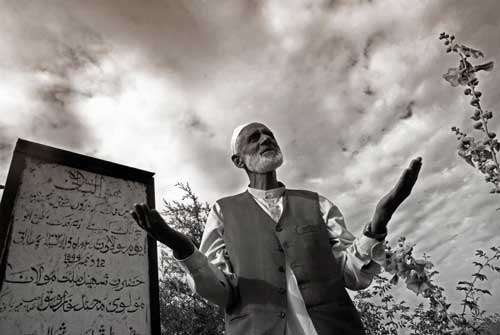 The killing of five civilians at the hands of the Border Security Force in Ramban and their burial makes us recall the conversation we had with Habibullah Khan, the 80 year old caretaker of the more than two decades old Martyr’s graveyard, located next to the Idgah in the heart of Srinagar. The graveyard, which holds almost 1500 burials, had its first burial in the early 1990’s when militancy was at its peak. Carved in marble, at the entrance gate, are the lines, “Lest you forget we have given our “ today” for “tomorrow” of yours,” reminding visitors and passersby of the sacrifices made by those who lost their lives fighting for the cause of Kashmir.

Grave digging was not a profession which was passed on to Habibullah by his forefathers. This tall, lanky and bearded man was once an ordinary shopkeeper who took up the responsibility to look after the graveyard when he, like hundreds of others in the Kashmir valley, was affected by the everyday violence in the Kashmir valley.

For Habibullah, becoming the caretaker of the graveyard was his way of giving back to society, his contribution to the struggle being waged by his fellow “freedom fighters” and his way of showing solidarity with the cause of Kashmir.He recalls frequent encounters between Indian security forces and militants, leading to numerous deaths, torture and many human rights violations.

During our conversation, Habibullah reminisces about the fact that the graveyard is a reflection of the ups and downs of the Kashmir struggle. The youngest person in a grave is, horrifyingly, a two-year-old who was allegedly killed, along with his mother, by the security forces. He says it was the 1990’s which saw the maximum number of burials; at times as many as 15 bodies were brought to the graveyard in one day. It is in this very graveyard that Habibullah conducted the burials of both Ashfaq Majid and Hamid Shiekh, two of the four young men who had formed the HAJY group, famous for launching an armed movement against the Indian state and some of the first to have crossed over to Pakistan for arms training during the late 1980s and early 90s.  The Y and J are Yasin Malik and Javed Mir respectively, the top leaders of the separatists group the JKLF.

We ask Habibullah how he identifies a martyr. His answer was very matter of fact. A martyr, he said, is one who has a tiny bullet mark in the front of the body and a big blot of blood on the back!

The burial of Mirwaiz Moulvi Farooq, one of the moderate leaders and Chairman of the Awami Action Committee as well as the father of Hurriyat Moderate Chairman Mirwaiz Umar Farooq, is still etched in his memory for several reasons. There were an unprecedented number of mourners that attended the funeral. He also recalls that death and funeral procession for its brutality. The Mirwaiz was allegedly shot by ISI-backed radical separatists on the 21st of May, 1990, followed by the killing of 60 civilians while his funeral procession was being taken out, by the Indian security forces.  He says, the story which began when the Mirwaiz was killed and the mourners fired upon, is unending.
In the following years the rise and spread of protests to other parts of state was accompanied by civilian casualties from every nook and corner of the valley. Habibullah says that the Martyrs Graveyard of Srinagar is not big enough to accommodate so many dead. So several other martyr’s graveyards have been created in other districts and towns of the valley.

Habibullah quoted another burial which he claims reinstated his belief in the Almighty. It was in the year 1992, when the semi-decayed bodies of five martyrs were brought from the border town of Uri in Baramulla. The state of the bodies horrified him and he gave a tearful burial, praying for a better life in their next births. But the end was not to be so. Out of the five, one was yet to be identified. The earth on the fresh graves was still cold when the army descended upon the graveyard and demanded the body be exhumed for identification. Repeated tearful pleas citing the condition of the bodies fell on deaf ears and he was forced to dig up the grave. Habibullah claims that the sight that greeted his eyes was nothing short of a miracle, as the bodies had no marks of torture and the faces of the young martyrs were glowing with radiance. He says that it was Gods way of applauding his work and his service to the cause of Kashmir struggle.

The Martyrs Graveyard is the resting place of the many significant separatist leaders of Kashmir: Mirwaiz Moulvi Farooq and Abdul Ghani Lone amongst many others. Ironically, many of them were killed not by the Indian security forces but by other factions of separatists.  The graveyard seems to be the only place where all ideological differences cease to matter, the canvas holding all the colours required to complete the painting.

At the end of the meeting, Habibullah, weeping, breaks into a soulful song of lamentation about the lives lost, of the young and the old who died for a common cause. Ramban is a grim reminder that the tragic saga of burials and martyrdom does not seem to end.